“The Holy Communion of Churches brings together the rich heritage of the ancient church in a modern world.”

THE DIDACHE, or “Teaching of the Twelve Apostles,” is an anonymous text dating from the late first or early second century, making it one of the earliest non-canonical Christian texts. A central theme of the text is moral instruction, organized around the “two ways”: the “way of life” and the “way of death.” Each “way” consists of a list of actions that characterize those who follow it.

SIMON KIMBANGU was an infant when he received a blessing from a Protestant missionary and nearly 30 when he heard the divine call: “I am Christ. My servants are unfaithful. I have chosen you to bear witness before your brethren and to convert them. Tend my flock.”

The Church and Healthcare 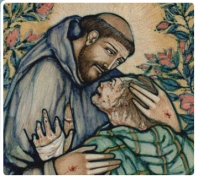 IN THE EARLY YEARS of the faith, pagans and ­Christians shared similar attitudes toward medicine and healing, but the church fathers believed God created the material world for the use of humankind, and this influenced their views of medicine:

#AncientFaith #ConvergenceMovement Moment: All Saints’ Day, also called All Hallows’ Day, Hallowmas, or Feast of All Saints, in the Christian church, a day commemorating all the saints of the church.

January 5: Eve of the Theophany of Jesus Christ

The fourth day of the Forefeast of Theophany falls on January 5. If January 5th falls on a weekday, the following order is observed: Vespers on the evening of the 4th, then Matins. The First Hour is not read after Read more…

The Liturgic Assembly of the Heavenly Hosts

The Liturgic Assembly of the #Heavenly Hosts. The #Angelic Ranks are divided into three Hierarchies: highest, middle, and lowest. The Highest Hierarchy includes: the Seraphim, Cherubim and Thrones.

January 6: The Feast of the Theophany of Jesus the Christ

January 6: The Feast of the Theophany of #Jesus the Christ. #ApostolicSuccession #Church #Faith #ConvergenceMovement

"Bringing The Ancient Faith To A Modern World"